Before the virus hit, I used to travel a lot, and, not being the most confident of drivers, my usual mode of transport was by train. There is something about travelling across the lines that conjures up all sorts of romantic ideas. However, we all know that the reality isn’t actually the case. Here in the UK, especially: expensive, frequent delays, overcrowding, and just that little bit uncomfortable at times does not make it the most appealing way to go.

However, when I am on a journey, I like to kick back, listen to some tunes, do some reading and yap away on Whatsapp. However, what I like to do most of all is just stare out of the window, and lose myself in the rhythm of the train heading somewhere special.

I’m clearly not the only one who likes trains – musicians have decided that writing about trains is not a bad idea:

And, let’s be honest there are lots of paintings with trains that we can talk about, 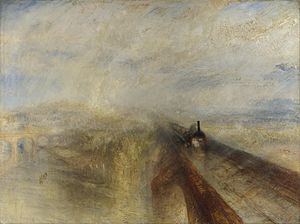 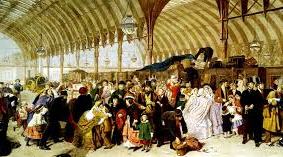 but there was one image that appeared on my Twitter feed that stopped me in my tracks!🤦‍♀️

And it was this linocut:

Where to start with this? With a blue-grey and gold palette, rounded walls and ceiling and with the intersection, this immediately puts us underground. Edward Bawden, of design and illustration fame, has never really done it for me, but after this, I think I will have to backtrack because this work is just the ticket. (Oh dear, we need to put the brake on the puns now!)

What I love about this is the way in which we are positioned right between the track and the wall; you can almost smell it, and the growing sound of steel on metal is overwhelming and a little scary – that train will pass by so close as you are pressed up against the wall.

Three sets of tracks take up the middle ground; one leading off into the left hand tunnel and two into the right. Just by using simple curved lines, Bawden has created an almost 3D effect with the tunnels. If you look straight at the middle point where the two walls meet, you cannot fail to be a part of this scene.

And, thanks to the Postal Museum, here it is:

But what about the train itself? At first I thought it was a simplification, just lines forming the shape but as this is entitled, Post Office Tube Railway, the only point of reference I had was that good old Auden poem we learnt at school:

Time to do some research before we get sidetracked into the world of WH Auden. Seriously, I will stop now!

Bawden designed this to be a poster in 1935. The commission came from the post office to advertise their Post Office Underground Railway which had opened in London in 1927 and ran the world’s first driverless electric trains.

The start of the 20th century saw the capital as a congested, slow moving conurbation. The London mail delivery service was frequently impacted by the heavy fog that descended at night and congestion on roads, so a solution was needed to speed up the mail deliveries. Someone had the idea of sending it underground, however, not on the existing tube lines, but its own dedicated line. By 1927, this was the route across London. It took 15 years from the submission of the plans by the Postmaster General to parliament to the actual completion of the line, with the first World War stopping the building for its duration.

This is the original mail car which only lasted for three years when everything was upgraded. The mail system continued throughout the 20th century, only closing in and the whole system lasted until 2003, and it is clear now what Bawden focused on.

But how does Mr Bawden fit into this? Bawden was commissioned to design a poster for the Mail Rail, and although approved, was not used. What an absolute pity! This is a marvellous image, and although intended for a commercial market stands up with some of the great train art you will see!

Incidentally, although everything is closed right now, this might be an interesting trip one day: