Affected by the growing consumer market in design, art and architecture, the movement, known as ‘Art Nouveau’ or New Art, was embraced by all nations throughout Europe. It could be said that the clean, sensuous lines of Art Nouveau were formed as a backlash to the stuffy Victorian model and compounded by the political upheaval of the early part of the century Influenced by their own historical pasts and, especially the colonial influences, driven by the advent of illustrated magazines, and aimed predominantly at newly emancipated women, this new form was perfect for advertising in department stores, catalogues, newspapers and posters to promote the style.  But while there were similarities in features such as decorative details and patterns, sensuous linear forms and symbolic devices, geographical differences were inevitable.

Starting in France, early Art Nouveau designs incorporated the stylised depictions of plants and flowers on its canvases and objects in a nod to its Japanese influence; similarly, the female form underwent a distinctive change with elongated shapes, elegantly draped clothing and brightly coloured palette.

In England, the Arts & Crafts movement, and, specifically, designs of William Morris preempted the symbolism and repetitive patterns used by the artists of the period and a linear sty

le in black and white became favoured by artists such as Aubrey Beardsley.

Scotland’s Rennie Mackintosh revived the Celtic decoration as his contribution to the movement. 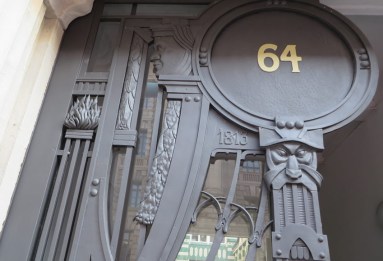 Germany, too, had a form known as ‘Jungendstil’ and the designs became used in practical ways with wallpaper and furniture coming under its influence. However, the most extreme form could be said to be found in the architectural designs of Antoni Gaudí in Spain, with his undulating lines, mosaics and wrought iron work.

Antonio Gaudí was greatly influenced by the natural world in all of his architectural works and this can be seen in his various works throughout Barcelona: Casa Mila, La Sagrada Familia, and Casa Batilo, to name but a few.  In fact, when one thinks of Barcelona, it must follow that Gaudí is the one name that will be eternally linked with the city. 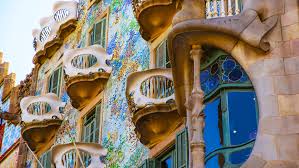 Count Eusebi Güell, a local entrepreneur, and Gaudí’s lifelong friend and patron, supported a number of Gaudí’s works in the city, and together they created Park Güell, a park in which modern homes would be built to take advantage of new techniques in design and architecture.

One of the lesser known Güell/Gaudí projects was Güell Pavilions in the Pedralbes district.  Güell asked Gaudí to redesign his holiday home in 1884 and the wrought iron gate to the Pavilion is the subject of this essay.

This is a colour photograph of the gatehouse at the Güell Pavilion, that consists of three buildings, built in brick of differing colours, all of which are light.  There are prefabricated cement blocks across the bottom of the buildings.  There is ceramic tiling in the upper halves and all of the buildings have chimneys and we can see the symbol of the Güell family on the right hand chimney.

The gate is situated in the ornate gatehouse and is in one piece with the hinge being to the right.  The bottom half of the wrought iron gate has a repetitive pattern that is mirrored in the cream ceramic tiling.

The dragon sits atop the metal bar and gives the appearance of balancing on top of the gate. Its spindly legs and claws seem to cling to the metal fencing, its head turned towards the outside and the open mouth reveals sharp teeth and gives the impression that it is about to roar and to belch flames. The body of the dragon is hidden behind the stretched out wings.  The wings are in nine segments,and are taut, ready to fly.  The neck, body and tail are thin and appear made of springs.

Despite his modernist ideas, Gaudí looked to the past to combine with new techniques in industry to create something beautiful, modern, yet in keeping with the surroundings.  Gaudí’s initial thought was to look back on orientalist designs of the past and even to the Greek myths and the story of Ladon, the serpent, who guarded the Garden of Hesperides. Gaudí was an expert in understanding a patron’s needs and also to flatter; a skill that a successful businessman would need in abundance and one that many of the commercial artists of the movement sought to exploit.  The Greek story was one of the labours of Hercules, and a poem written by the famous Catalan poet, Jacint Verdaguer in his poem L’Atlàntida.  The poem was dedicated to the first marquis of Comillas who happened to be Güell’s brother in law.  Other symbolism linked to the story of the serpent includes the antimony orange tree, the serpent was wrapped around in the garden and Gaudí even went as far as to design the shape to match the Serpans constellation.

Originally polychromatic, with red jaws and a glass eye socket, time has reduced the dragon to its metallic origins.  The Applied Arts were important to Gaudí, and he also utilised cheap, mass produced items to create the dragon.  The head and scales were made from sheet metal, the wings, wire mesh and the tail was a refurbished spring!  Modern industrial techniques such as forging, earth-casting and hot and cold metalwork were employed here and it is interesting to know that Gaudí was proficient in these techniques having been an apprentice at the Sadra boilermaking shop and at the Cire Ironworks in Reus.  Ironworking was a Catalan speciality and Gaudí used local artisans to create his designs, thus keeping the idea of the arts and crafts movement alive.

While modern in its creation, the roots of the symbolism of the dragon was particularly linked to the history of Barcelona and Gaudí was well aware of this link to the history of the city.  The city’s founder, the mythical Guifre el Pilos, is said to have slayed a dragon to defend the Catalan people.  The popular story of St George defeating the dragon, often replicated in paintings, resonated with the people of Barcelona as St George is also their patron saint.  The ferociousness of the dragon’s expression matches the severity of the talons and, again, Gaudí utilises the whiplash curves of art nouveau design with the shape of the neck, body and tail all being in an undulating style.

Gaudí was fond of this motif and throughout the city you can see dragons, whether it is in Park Güell with the famous ‘El Drac’ fountain in Park Güell, with his recycling of broken tiles and ceramic dishes forming the mosaic surface: 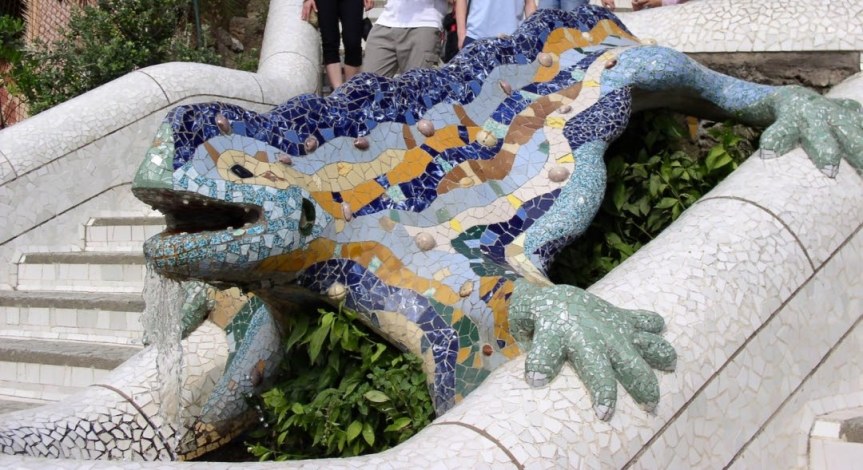 The roof of the Casa Batilo, with its polychromatic tiles reminiscent of the dragon’s scales  and the struts of the interior roof representing the dragon’s rib cage:

And, as a staunch Catholic, like his friend, Güell, Gaudí ensured that he placed dragon symbols throughout the Basilica at Sagrada Familia.

Finally, while we have explored the importance of dragon symbolism in connection with Barcelona, we must not forget its significance in Japan and in Japanese art.

Japanese art had become fashionable in Europe at the same time that Art Nouveau was in its infancy. By the 1890s, Siegfried Bing, a German art dealer living in Paris, was collecting and selling art in his shop, La Maison de L’Art Nouveau, and its popularity amongst artists was beginning to be felt. ‘Japonisme’ as it was known, was attractive due to its perceived simplicity of form.  Artists were able to concentrate on a new element to their art, through the techniques used, through to composition, motifs and colour.

Seven things to know about Japonisme

For Gaudí, the motif of the dragon was clearly an important one and his use of it gives Barcelona its strength and protection.