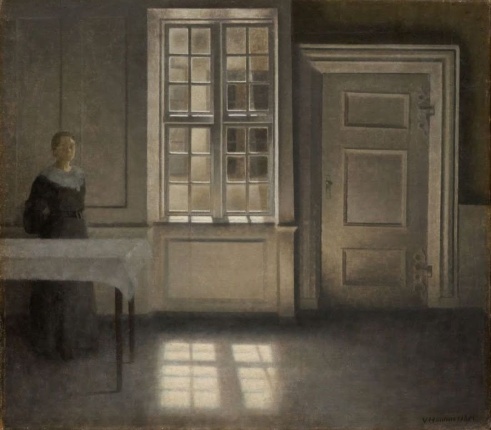 Take a look at these two paintings, both by Vilhelm Hammershoi.  We could play spot the difference here, but it is a little obvious.  The one on the left is in the possession of the Cleveland Museum of Art and is called ‘Strandgrade, Sunshine‘.  The one on the right, Interior, Sunlight on the Floor, is owned by the Tate in London.

What is interesting is that a) they are of the same scene and were painted in 1906 and, b) the one on the right holds a little mystery when it is taken out of its frame.  If you watch Michael Palin’s film on Hammershoi and get to the 8 minute mark, you can see that at some point, the left hand side of the painting was folded back and when exposed to an infra red camera, the figure of Hammershoi’s wife, Ida appears:

Michael Palin and the Mystery of Hammershoi Hammershoi did love to paint the same scene over and over but there are usually some differences.  A similar one from 1900, Dust Motes Dancing in Sunshine, shows the same window and door, but with the light coming through at a different angle.  There is even one at the Met, but of a moonlit night! What is lovely about the Cleveland painting is that you get to see the difference a figure can make to a painting.