Thanks to Twitter, I picked up on a rather striking surrealist painting by an artist I had not come across before: John Pemberton.

This is an excellent composition and has so much going for it, from the sinuousy curves of the pier reflected in the tightly clad bodies of the mysterious veiled figures and the metalwork of the lamps, to the strikingly angular figure seeking out the steam ship sailing away to the edge of the canvas. The shadows are terrifying: the shapes seem to be weapon-like.

I wondered if this was drawn from a real pier, and found the pavilion a little reminiscent of Margate Pier. 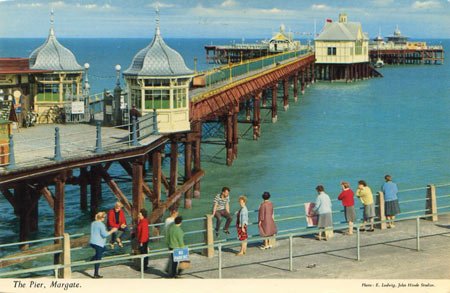 Pemberton married the actress, Antonia Pemberton in 1946, who originated from Margate, so it is possible that Pemberton was using places he knew as the backdrop. This structure is also in another painting I found at National Galleries Scotland, by another British Surrealist, who will be the object of my next post!

Research shows that Pemberton was a scene designer for the Old Vic Theatre in London at the end of the 40s and into the 50s and so the theatricality of the clothing, the figures’ positions and the lamps all play a part in this wonderful work.