I am so happy that I squeezed a final exhibition in 2018 and that it was this one…because I didn’t actually like it. No, that’s not true. What I should say is that I didn’t really get it!

Léger has been an odd one for me on this journey as he is everywhere. Wherever there is modern art, Léger sneaks one or two pieces in and I always had a bit of a head scratch when I looked at them. I did think that seeing an exhibition of him might put that right, and I would ‘see the light’. Sadly, it wasn’t the case.

Waldemar Januszczak went along and I stayed away from his review until I had seen it, and here is why I am struggling to get Léger:

In this instance, however, the venue switch feels damningly appropriate, because Joseph Fernand Henri Léger (1881-1955) turns out to be a lighter hitter than we have habitually assumed. Yes, he’s in all the books and always mentioned. But his accomplishments are blurred. Half abstract, half figurative, not quite a cubist, not quite a futurist, nearly a progenitor of pop art, nearly a vociferous socialist, but also a visibly un-socialist painter of bulky French nudes having fun, Léger manages to fall between every stool in all the dimensions he occupies.

Nail on the head – he’s not fully anything! Just as when you taste wine, you get hints of flavours, that is what I found here. It was all rather nice and safe but I kept thinking of other works from the same periods that stand out more. Don’t get me wrong; I did like some of what is on display, but I kept thinking, “it reminds me of…”

The ones I really liked:

After experiencing at first hand the front-line and being in a mustard gas attack, Léger utilised his cubist leanings to an excellent mechanical depiction. Note the medals, the pipe, the helmet. Was reminded of Dix’s The Scat Players, and while I love the dark macabre Dix, I was impressed with this one.

One of my favourite exhibitions this year was at the Ashmolean in Oxford – Cool Modernism, and this one by Louis Lozowick was a real favourite and I was reminded of it by this by Léger. Lozowick is more mechanical to me, mainly due to the palette, but Léger’s is definitely more fun! 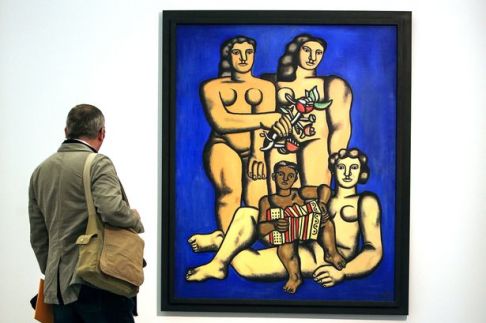 When Léger does nudes, then Waldemar’s comment of “bulky French nudes” come to mind and it really reminds you of Picasso’s large limbed women of the 1920s!

There were a couple of paintings that did catch my eye in their own right. The first was Propellers, from 1918: 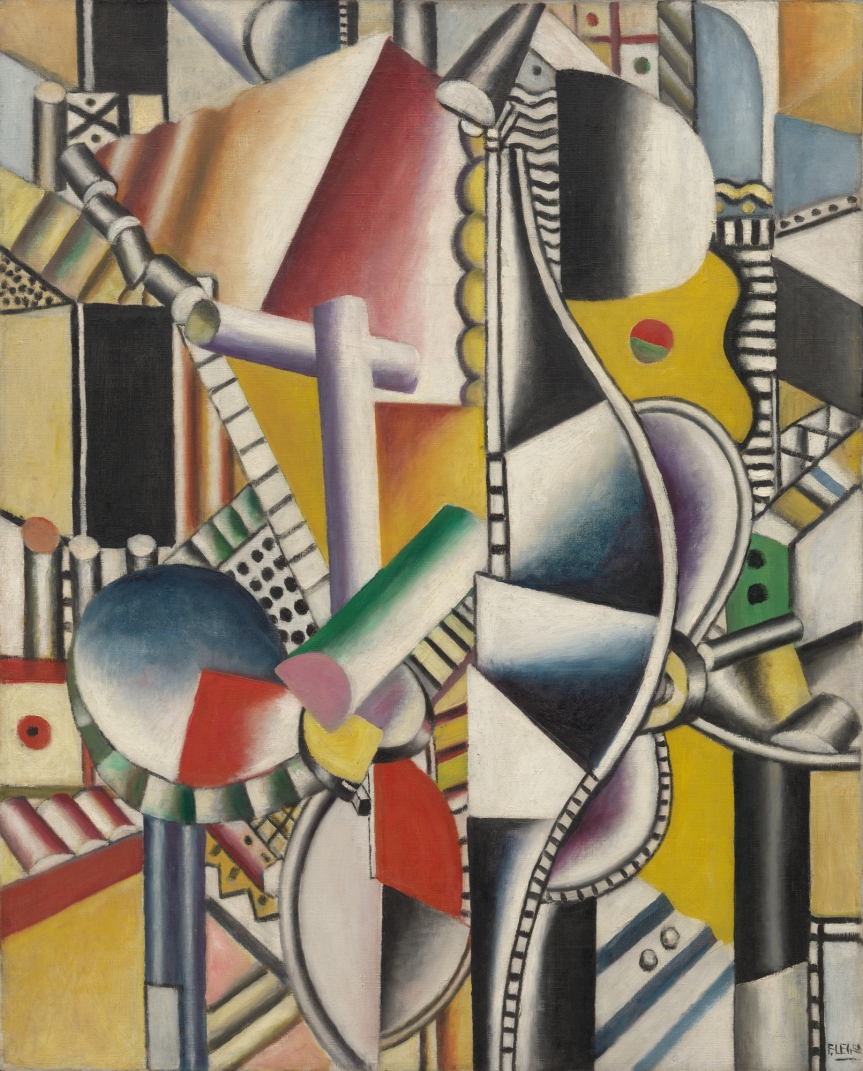 This pulsed and moved and was a delight to stand in front of. If a painting ever had elements of 3D about it, then this was it. Clearly, Léger understood the way the colour wheel works and this lit up the room.

As a contradiction to this, in the second room, Léger is now looking at nature more and Tree Trunks made me stop in my tracks:

This was an eerie abstract and one that I would have on the wall. There is the element of the supernatural about this, body and bark combined and you felt that this one would reach out and drag you in. The restricted palette was a cool contrast to the vibrancy of all the other works.

I do like to know about the artists I’m viewing, but by then end, I didn’t get any sense of what Léger was actually like, or the sort of life he led, or what he really believed in. I kept imagining someone very buttoned up, quiet, methodical in his execution and always cheery.

Do recommend reading Waldemar’s review for a much deeper insight into the man and his works. While I didn’t get my usual insight, I would recommend seeing this. It is on until the middle of March, so perhaps a second viewing might change my mind on the ever cheerful Léger.