One of the paintings under discussion was Evil Mothers by Giovanni Segantini, an artist I have a love/hate relationship with!

As with much of the art I talk about, it has probably only been viewed through a screen, although I am ploughing my way through the major and minor art galleries of Europe.

Evil Mothers was such a painting…until today. I sometimes research too much prior to a visit but am so glad I didn’t as the feeling when I sauntered into a room at The Belvedere, Vienna to be met by this:

It is glorious in its coldness, the bleakness of the icy landscape and the focal point of the mother twisting in the tree’s clutches.

“Breathtaking” is the adjective for this. Up close, you can see threads of gold, through her hair, through her clothes and in the mountain range.

Sorry about the window reflections!

I do have issues with this series of paintings and always glare at The Punishment of Luxury, before giving it a big grin when I visit the Walker in Liverpool. Segantini’s viewpoint, that women who remain childless and unmarried are not fulfilling their destiny, is not one I can agree with but can admire the art itself, but his hypocrisy in his failure to marry the mother of his own children thereby leaving her stateless upon his death, is more difficult to deal with. It is hard to respect someone who makes such a stand against something but then embraces the same without any thought of irony.

His art clearly reflects his view; our ‘Evil’ mother has succumbed to her natural urges and given birth, thereby reaching a state of nirvana. In fact, there is a subtitle to this piece: Nirvana of the Lustful. Given that the companion painting, The Punishment of Luxury was originally entitled The Punishment of Lust, we can see how the two go together as before and after pieces. 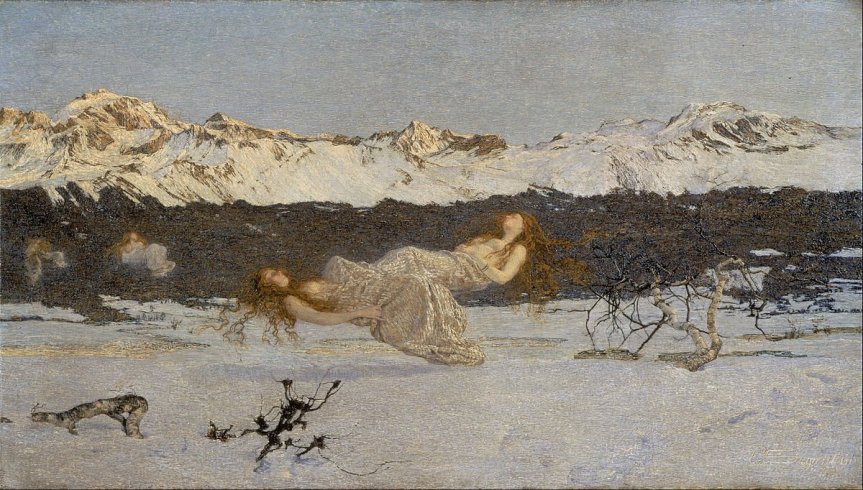 The floating women are being punished, held in limbo, but our mother is caught up in the branches of the tree where she does fight, if her taut body is anything to go by, but the feel of the child at her breast overpower her initial reluctance to embrace motherhood.

Segantini’s beautiful landscapes are worth seeing and to have the chance to see this one today was such a thrill.

Oh, and Klimt’s The Kiss is here too, but it just couldn’t compare!!