I am meticulous with my planning for trips: you want an itinerary drawn up, I’m your girl. I learn from mistakes so, for example, I rarely travel so that I am in cities on a Monday. Most galleries close on Mondays. Occasionally, I’ve been caught out on other days, so I do a double check.

However, I could not have pre- empted one of my destinations to be closed for safety issues on not one but two different days!

This was one I was excited about as it covers the art period I am most interested in. However, they do have an extensive web site so join me on a virtual tour round some of the paintings and statues I would have been interested to see.

The card with this painting describes the use of Warming Halls as part of welfare support. Paintings that are not afraid of sharing the realities of the times are so important and this was a move away from the requirements of classical painting expectations:

This warming hall was situated in the arches 69 to 99 of the suburban railway near Alexanderplatz. In a handbook of Berlin welfare institutions dating from 1899 it is described thus: “Open during the winter months from 7 a.m. to 7 p.m. Capacity of about 1,300 persons. Washing facilities provided. Impecunious visitors can obtain free rolls, coffee, milk, and soups, other visitors are asked to pay a small contribution of 2,5 / 5 / and 10 pfennigs. In return for board and lodging, a number of jobless people are employed in a special workshop, mending the clothes and the shoes of the patrons of the warming hall, others make straw mats or blankets from rags.”

This nude caught my eye because you can make the link to the way French artists were rebelling against the Salon. This is not a nude in the classical sense; her face is hidden from us as if she is ashamed. Her lack of engagement with the viewer puts us in the position of voyeur.

This appeals to my dark side; Doomsday is such a perfect title. I came across Meidner in Leicester, with his Apocalyptic Vision:

The dark, threatening clouds over the undulating and pulsating landscape reflects the feelings that the war would induce in artists. The bodies are close together, the end is definitely nigh, going by their expressions.

As one of the leaders of the German Secession, Tappert has captured the form and structure of expressionism and taken a classical biblical story and shown more of a reality than tradition would usually allow.

Lot’s daughters, fearing they will be without husbands, seduce their father. While one daughter seems to be open and full of desire, her sister shows the anxiety that the situation is causing.

This would have been the highlight of the trip.  How much is this in thrall to David Bomberg?  The way the fractured elements pour into the frame itself is wonderful.

This was a fascinating portrait by Ivan Puni called Synthetic Musician from 1921 and I felt it was combining cubist form with Russian suprematism. And, I was right!

After World War I, Berlin became the destination for thousands of artists from Eastern Europe who had fled their homes after the Revolution of 1917. Ivan Puni came to Berlin in 1920 and stayed for three years before finally settling in Paris. In Russia he had organised significant exhibitions of the Russian avant-garde which reflected the transition from Cubism and Futurism to the non-representational art of Suprematism. In Berlin, Puni participated in the legendary First Russian Art Exhibition at the Galerie van Diemen in 1922.

In his “Synthetic Musician”, a Chaplinesque figure created in Berlin, Puni combined a representational idiom with abstract stylistic elements.

I love Otto Dix! Again, the caption can do more justice to this. The vertical nature of this I find fascinating. Six knows how to use a canvas to show more than just a portrait.  For more on Otto Dix, follow the link below:

Otto Dix first met Iwar von Lücken, a poet of German Baltic stock, at a Dada event in Dresden. He encountered the luckless poet again in the Romanisches Café in Berlin, the principal venue for bohemian networking.

This portrait of the bard has been executed in the style of New Objectivity. Dix shows him as a likeable anti-hero: standing at the window of his sparsely furnished attic studio in a threadbare suit, the poet looks every inch a failed idealist – here the trials and tribulations of daily poverty, there the riches of a lyrical, intellectual existence. The two roses in a beer bottle symbolise a life dedicated to the pen.

An interesting side issue to this painting is that in 2014, this painting was recreated in relief for a special exhibition for the visually impaired:

Blind Visitors can get in touch with exhibits

Felix Nussbaum has a darkness that completely appeals to me.  His life was tragic and his works make you believe that he knew this to be the case; that happiness would always be elusive and something that happened to other people.

This is beautiful! I was interested to see there was an influence by Malliol whose works I saw in Copenhagen last year. The supplication here is not subserviant, however. To me, given when this was created, it brings to mind those under the Nazi regime who would refuse to give in but who would hold an inner dignity. I’m reading a history of Ravensbrück Concentration Camp and this resonates with the stories of the women who passed through those gates.

Many young artists joined to form the studio collective Klosterstraße between 1933 and 1945. Bound together by their opposition to the NS-regime, the house of studios offered them a retreat from reality. Those artists included Ludwig Kasper. His works reveal an existential balancing act: the need to realise his personal concept of art contends with a fear of attracting animosity due to even moderate modernism. At this time the French sculptor Aristide Maillol was an important role model for young artists. Kasper had got to know Maillol’s works during a period of study in Paris.

This is such a powerful image; Hofer was not a supporter of National Socialism and with the rise of Hitler from this period, the prescience of this work is incredible. 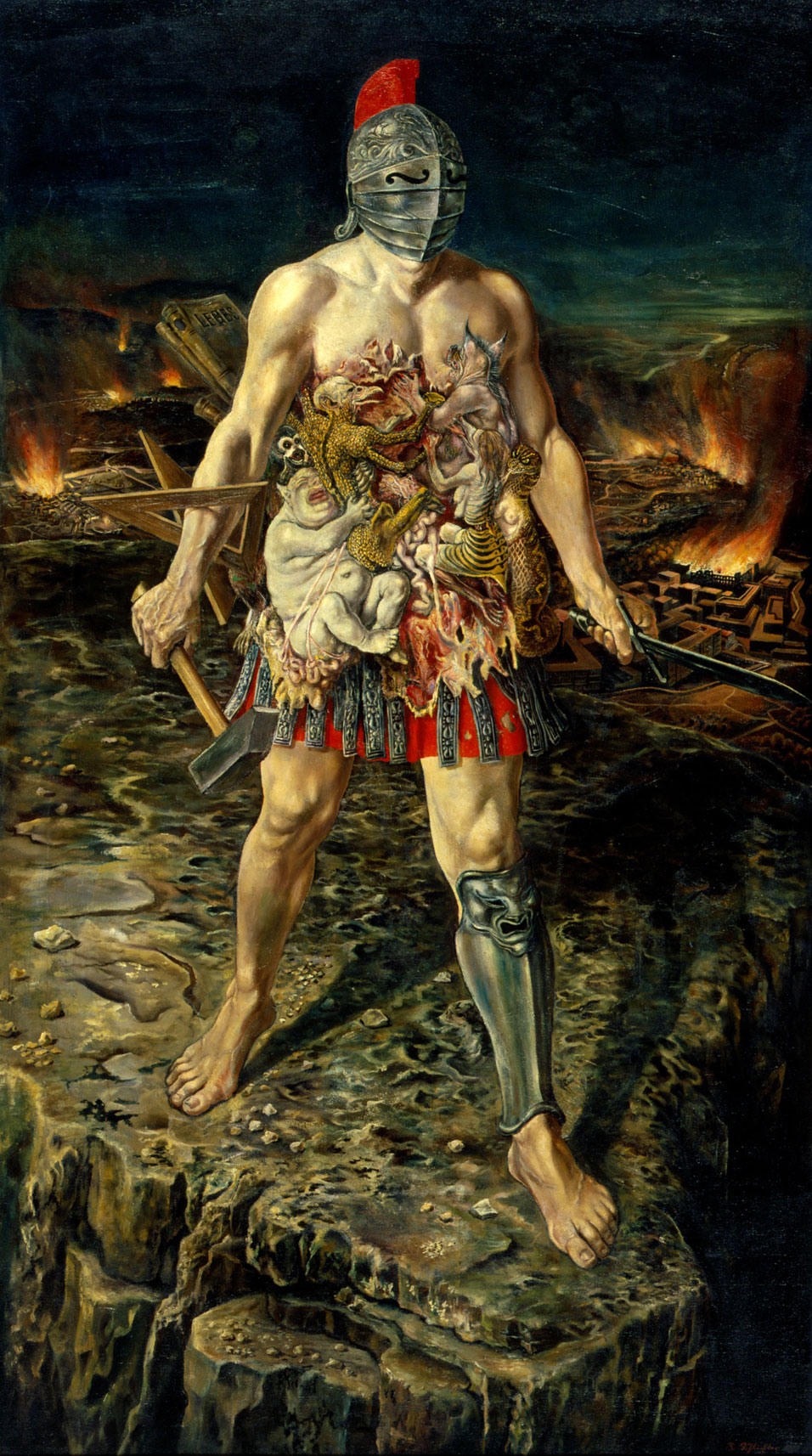 The final painting is, perhaps, the most powerful of all. For me there was a link to Goya here.

Against a dark sky, a muscular warrior strides across a rocky plateau towards the abyss. He is armed with a hammer and sword as insignia of violence and with legal texts and measurement devices as symbols of law and science. Behind him, in a landscape of devastation, cities are burning. Schlichter works here with two opposites: detailed photographic precision and fantastical visual creations. The fabulous beasts gnawing at the warrior can be interpreted as six of the seven deadly sins: pride, avarice, envy, lust, gluttony and sloth. The warrior himself, might represent the seventh deadly sin: wrath.

Political realities forced the artist to code his message in this manner. By 1937 the Nazis had consolidated such a grip on power at home that they were able to invade a number of other European countries in the years that followed. Schlichter’s visionary achievement is best expressed in the words he chose in 1949 to describe the art of his time: “With their nightmarish monsters, these pictures make us reel by confronting us so closely with the spurious foundations of our existence.”

I am disappointed not to have entered this gallery, but without question, this is one of the best websites I have come across.