I have had my ticket for this exhibition for months and even booked in a lecture. But, during the wait, my head was turned by the discovery of what looks like an even more exciting exhibition on in San Francisco, Cult of the Machine, that would be impossible to get to! Oh the heartbreak!

I was worried that this would be a poor substitute, and we all know how disappointing it is to be overlooked for something shinier and prettier, but America’s Cool Modernism, From O’Keeffe to Hopper has nothing to worry about; it’s gorgeous!!  Plus, I completely avoided the Royal nuptials, so I am very grateful!

I attended a lecture beforehand by Miguel de Baca, visiting Terra Professor of American Modern Art, who placed the exhibition in context. Was even brave enough to ask a question about Charles Sheeler and the Ford River Rouge work  – get me!

Then it was onto the exhibition and it was reasonably quiet so spent a great deal of time with some incredible works of art that have only ever been viewed in books.  Professor de Baca talked about how this period of American art is little known outside of the States and that there are no works in British collections, so this really was a once in a lifetime experience.

The exhibition itself is divided into three sections:

This Hartley starts the exhibition and it fits in with the fact that America, at this point in history was looking at itself and developing a way of expressing what it meant to be American through its art rather than looking at European art conventions.  Marsden Hartley is an interesting character and think he will appear on this blog again.

The bright colours and symbols are quite a shock when you first see this. Typical of Hartley’s style, loose brushwork, shapes lined in black but the colour inside is barely touching the edges.  Hartley explores Native American motifs and symbols: tepee, bow and arrow.  The symmetry is reminiscent of Matisse, particularly in his designs for the priests robes at the Vence Chapel: 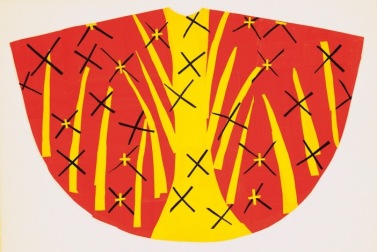 This painting, by Morton Schamberg was astonishing.  Based on industrial drawings, this arial view of a knitting machine was so lovely; parts of the machine in industrial grey almost come off the canvas.  There are no flat planes here and the palette brings it alive as a machine and as an idea. 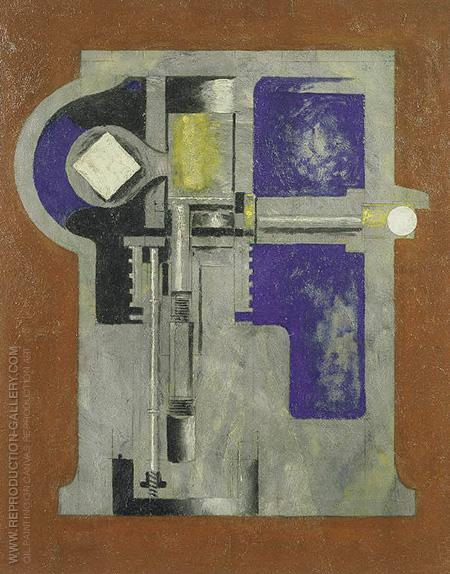 However, the highlight of the abstract section was this beautiful monochromatic abstract by Georgia O’Keeffe. 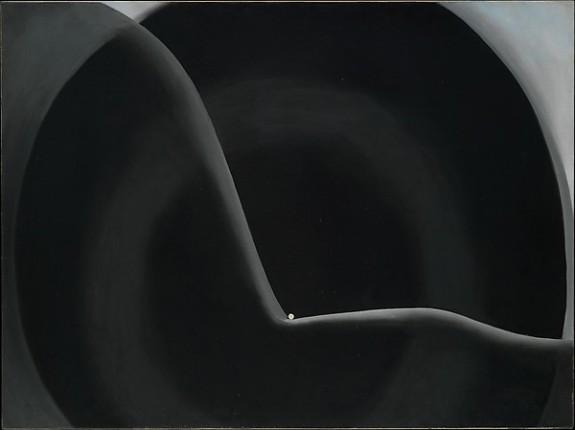 The use of light and shade, the halo effect and the intensity of the tiny dot of white in the centre just lends itself to simply standing in front of this and breathing it in.

Inspired by her experience of going under anaesthesia with the light in the room reducing down to a pinprick.  Accompanying this is a quote by O’Keeffe that explains how she saw abstraction:

I spent the longest with this painting and was moved by what I could see, so much so, I did a rare thing and wrote a story about it!

Black Abstraction. A story in 200 words

The Emptiness of Precision

The next gallery is where it gets really exciting – precisionists everywhere!

The curator, Katherine Bourguignon said this of this period:

“If you look at how the paintings are made, very precisely painted – not subjective, emotional brush strokes, instead very controlled and precise – it’s almost as if they’re hiding their own personality as they’re making these works, making a painting look as if it were made by a machine.”

There were a few new names for me and it was so interesting to see how this was a movement that was not a deliberate group of artists working off each other in the way Braque and Picasso did in the early days, but separate artists who wished to reflect the change that was occurring in the industrial heartlands of the United States.

Stella’s work has the touch of religion about them, particularly in the use of colour as when you see these you are so struck with how like stained glass it is.

The central image of the telegraph pole with the intersecting lines creates an image of the cross which made me think about how communication changed everything, becoming what we can see as a new religion.  It foreshadows our dependence on, and obsession with, technology and communication.

Having been lucky enough to see my first Sheeler in Paris, I knew there would be a few of his paintings here.  Having seen this in books, to see it in person was extraordinary.  The earthy tones give the feeling of a desert, ironically contrasting with the title of the work.  This is not a real building but a composite. The large, geometrical towers are softened by the pipework; cold steel encloses the life-affirming water to restrict what usually flows freely.

Again, the lack of a human presence is so apparent.  The idea of the automated process was fully in place by the time Sheeler painted this.  But, by 1945, the world was starting to feel that the coldness of machine was incompatible with human life.  The end of the war and the start of the nuclear age was underway as Sheeler looked towards a future where people would question the role of the machine. a

For more on Charles Sheeler:

Here, I discovered a new artist, Paul Kelpe and just loved this.  It has all the elements of this period that I find so fascinating.

At the bottom is man, he controls the machine, without him, it would all grind to a halt. OR, are we witnessing the social destruction of a way of life for the working man.  Only one man is needed to work all the machinery.

The verticals all blend into each other and the geometric reduced forms take us through the process.  Man and machine working together.

This has already been written about here: Ekphrasis but have to say that finally seeing this was a ‘wow’ moment!

In the final room, the attention is directed towards both the rural and urban landscapes.

What can you say when there are three Hopper Paintings in a row?  How about, “Can I have some more, please?”

This section looked at the more realistic depiction of a national identity.  Hopper’s ability to remove the human element but leave us with a sense of what it means to be American is legendary.  In 1933, the critic, Lewis Mumford, said:

Hopper has caught one phase of America, its loneliness and its visual exhilaration: The loneliness of even occupied houses, the exhilaration of even mean cottages and sordid tenements.

The lack of human interaction allows the buildings to speak for themselves and Hopper is a master of using light and shade to give a sense of life within even though we see so little of it.

A follower of Sheeler and Charles Demuth was Canadian born artist, Ralston Crawford.  Brought up in Buffalo and with a childhood spent travelling round the Great Lakes, Crawford had a keen interest in docks and shipyards and his exposure to the American industrial landscape was a major source of inspiration to him.

Two of his works, Buffalo Grain Elevators and Smith Silo, Exton had such a quiet quality about them. Up close, you can barely see a brush stroke. The flattened planes and distilled imagery create an ideal image of the changes to the rural landscape and, as with the other precisionists and with Hopper, the lack of human interaction is so obvious and so right. 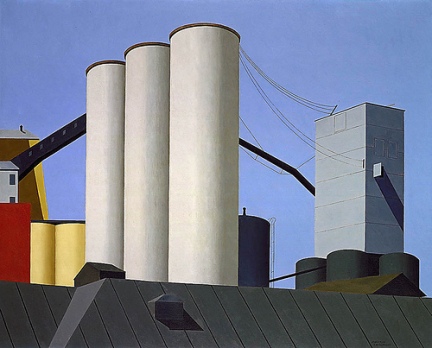 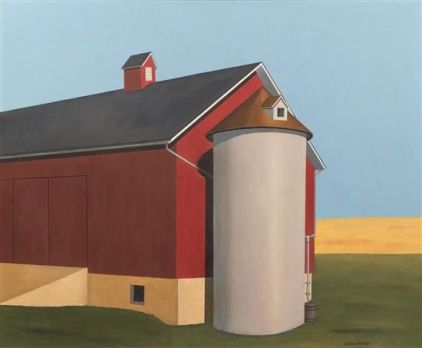 I have been to a few outstanding exhibitions but think this one is high up there.  All of my favourite motifs, ideas, style and artists all in one exhibition. Superlatives seem a little redundant when confronted with art that speaks directly to you in the way this does.