Towards the end of the second world war, Epstein was becoming more fascinated by the story of the fallen angel.  Inspired by a quotation from Milton:

He above the rest

In shape and gesture proudly eminent

Stood like a tower, his form had not yet lost

All her original brightness, not appeared

Less than archangel ruined and the excess

‘Lucifer’, tall, bronze and with an androgynous look, stands guard over the Round Room at the BMaG:

The usual technique of creating large scale bodies and working separately on the heads, meant that Epstein used the features of one of his favourite female models: Sunita.  The delicate, raised foot came from the biblical quotation in Isaiah: “How art thou fallen from heaven, O Lucifer, son of the morning!” 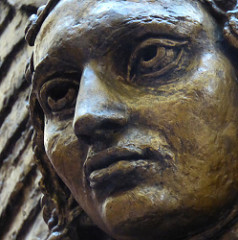 The finished sculpture was exhibited at the Leicester Museum and Art Gallery in 1945 and was purchased by the brother of the intrepid explorer, TE Lawrence, Professor AW Lawrence.  Strangely, despite Epstein’s fame, a number of renowned institutions turned down the gift of the statue, until finally, the cities of Liverpool, Manchester and Birmingham all offered to house this magnificent work.

Their loss was certainly our gain!  Lucifer had a birthday party on Friday evening and a splendid time was had by all.

Daemons and Angels: A Life of Jacob Epstein by June Rose