I came across Felix Nussbaum's work in a book I'm reading about 'Degenerate Art' and his subject matter resonates with me through my interest in World War II history and particularly, The Holocaust.

Born in Osnabruck in 1904, Nussbaum travelled to Hamberg and Berlin to study. Influenced by Otto Dix, Max Beckmann and Henri Rousseau, Nussbaum forged his own style, combining elements of the macabre, with the world he saw was falling apart. Nussbaum said that “I had left the world of innocence behind me. I did large compositions, works which mocked, accused and provoked.” 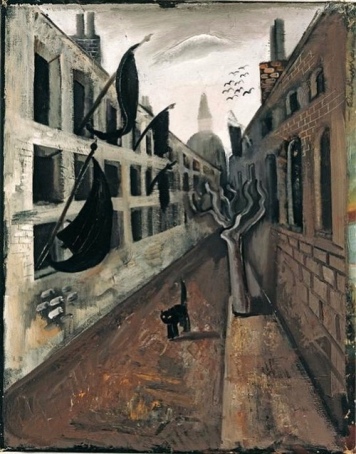 Nussbaum's experiences during World War II marked the change in his style. Arrested in Belgium in 1940, Nussbaum was sent to a concentration camp in the SW of France, but managed to escape a few months later. He and his wife, Felka Platek, then hid in a basement for four years where he produced the works that epitomised the fear and suffering experienced by the Jewish population who were living in fear of the Nazi terror that was unfolding.

His 1940 'Self Portrait in the Camp', is particularly haunting. Nussbaum stares out at us almost urging us to deny the scene unfolding in the background. His expression is not asking for our help, but is accusing: why are we allowing this to happen?

He later produced another self-portrait that gives us a feel of what was being experienced at the time. 'Self Portrait with a Jewish Identity Card' puts the viewer in an uncomfortable position-we are being shown the card and the Star of David – have we asked to see them? Nussbaum's. gaze is defiant but also passive to avoid confrontation. The combination of the dark clouds, the high walls surrounding us and the blasted tree add to the oppressive scene.

The third painting is the spectacular, Death Triumphant, painted shortly before his death. Clearly inspired by the apocalyptic works of Goya and Breugel, Nussbaum shows us what is to come with the impact of war destroying the civilisation we all know. The skeletal angels trample over the rubble brought on by the destructive forces of man.

Nussbaum never had the opportunity to show his works. Denounced by a neighbour, Nussbaum and his wife were arrested and eventually sent to Auschwitz where Nussbaum died one week later after arriving the camp. He had the foresight to hide his paintings which were eventually discovered in the 1970s. His works are now exhibited in his home town, in accordance with his wishes that “If I disappear, don't let my paintings die with me. Show them.'